Gain efficiency with a more accurate view of the paths that lead to conversions
Next: Channel groupings in data-driven attribution models

By default, Search Ads 360 gives all credit for a conversion to the last click that leads a customer to your site. But a significant number of conversions may result from a path with several interactions—clicks on display ads as well as paid search clicks driven by shopping campaigns, generic or brand keywords, and other biddable items. By analyzing these interactions you may learn that some types of keywords or other biddable items tend to play a larger role in driving conversions than simple last-click attribution can reveal. If you increase bids for some of these previously undervalued keywords, you may gain efficiency with your advertising spend.

Data-driven attribution (DDA) analyzes interactions in your campaigns and creates a model for distributing conversion credit based on where an interaction occurs in a conversion path. Then DDA applies the model to the conversions in your advertiser, so you can see a more accurate picture of how clicks on keywords and other biddable items lead to conversions.

For example, DDA may uncover that the following conversion paths occur frequently within an advertiser's campaigns (see the following image): 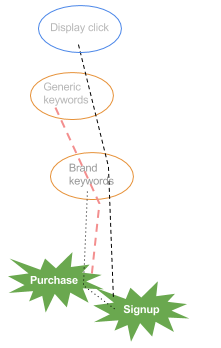 By comparing these paths with other interaction patterns, DDA may create a model that distributes credit as follows (the percentages below are just examples and may be very different for your specific campaigns):

After Search Ads 360 generates this example model, the advertiser can compare conversions reported by the DDA model with the last click model. The example report below shows that the advertiser's upper funnel keywords play a larger role in driving conversions than last-click attribution reveals.

As with all bid strategies, comparing performance with manual bidding (or with other bid strategies that use last-click attribution) requires careful preparation and a timeline of at least a few weeks. Learn more about comparing bid strategies.

A DDA model can enhance the optimization provided by a conversion goal in campaigns, budget plans, and bid strategy opportunities.

If you want to model other types of interactions, you can define custom channel groupings. For example, you might want to know how your generic, brand, competitive, and promotion keywords and product groups interact together to drive purchases and newsletter signups. To create this more complex model, you need to specify custom channel groupings when you set up a DDA model.

For example if you have two Floodlight activities that are not in the same funnel, such as "Retail purchases" and "Wholesale inquiries", you could do either of the following:

Or you can create three models, one for each funnel and one for the combined funnels, and compare them.

Search Ads 360 may be unable to directly measure Floodlight conversions and imported Google Analytics goals and transactions when website cookies that store information about your ad clicks aren't available. This may be due to factors such as browser settings or application settings, even if you use one of Google's sitewide tagging solutions. In these cases, Search Ads 360 uses machine learning and historical data to model the number of conversions and amount of conversion revenue that cannot be directly measured. Reports and bid strategies in Search Ads 360 use the resulting estimate to scale conversion metrics and provide a more complete picture of how your advertising drives conversions.

DDA models include these scaled conversions both when generating a model and when applying the model to a Floodlight column.

Which advertising channels are considered part of a conversion path?

Note that just like other attribution models used in Search Ads 360, a Search Ads 360 DDA model ignores impressions (both search and display). Search Ads 360 doesn't have access to data about display and natural search impressions, so only clicks can be considered as interactions that potentially lead to conversions.

As a general guideline, DDA needs 15,000 clicks and 600 Floodlight conversions during the last 30 days to successfully generate a model. The clicks can come from any search engine, social engine, or engine track account that you've added to Search Ads 360.

For example, if you create a model with the following data:

You'll need a total of 15,000 clicks on the Generic and Brand keywords in your channel groupings and a total of 600 conversions from the Floodlight activities in your retail funnel, all during the last 30 days.

Search Ads 360 can start preparing the model as soon as you receive the minimum number of clicks and conversions over a period of 30 consecutive days. The initial learning period lasts about 24 hours.

Once the model has been generated, Search Ads 360 applies the model to offline conversions that meet the following criteria:

The DDA model continues to learn and updates the model each week. Any new campaigns, keywords or other items you add to your channel-grouping labels will be reviewed and incorporated into the model. That is, the attribution can continue to change. Note that updates to the model only apply to new performance data going forward. Search Ads 360 does not apply the updates to historical data (conversions that occurred before the model was updated).

If the weekly number of clicks and conversions falls below the data requirements, Search Ads 360 uses a previously generated model. If Search Ads 360 hasn't been able to generate a model within the previous 30 days, the DDA model applies the basic linear model and will retry the update next week.

Model updates are typically subtle, and the effect on reporting data is gradual, since the updates apply only as new conversions are reported.

The model is applied in real time

The model is applied to the reported data multiple times throughout the day, giving you reporting data in near real time.

You can create up to five DDA models in Search Ads 360. Consider starting out with a couple of different DDA models with different channel groupings and compare the insights you gain from each.

After you create the model, compare data from the model with other models. For example, create the following Floodlight activity columns that report on the activities in your model:

Add the columns to a reporting table and compare the data in each. You may learn that some of your long-tail keywords are playing a larger role in driving conversions than you thought.

If you find a model that you think accurately reflects your business and business goals, use the model in a bid strategy to achieve your goals with the optimal spend.

To get the most complete view of conversion paths, include cross-environment conversions when you report on a data-driven attribution (DDA) model or use a DDA model in a new or existing bid strategy.

Cross-environment conversions start on one device or browser and end in another. For example, a customer may click a search ad on a mobile phone,  then later use a desktop device to directly access an advertiser's site and convert. By default, Search Ads 360 only reports conversions that occur on a single device or browser. But by leaving out cross-environment conversions, you may be undervaluing the role some of your ads play in driving conversions. A default report in Search Ads 360—even a report that contains a column with a DDA model—wouldn't count the conversion in the example above because the paid search click and the conversion occurred on separate devices.

How soon do cross-environment conversions appear in a DDA Floodlight column?

How do DDA models in Search Ads 360 differ from Campaign Manager 360?

Both Search Ads 360 and Campaign Manager 360 models analyze the following types of events: