Explore your user journeys in a tree graph.

The path analysis techniques lets you do things like:

To create a new path analysis:

Your new path analysis appears. On the left is the starting point you selected. To the right is STEP +1, which shows the top 5 screens that your users viewed or events they triggered after that starting point.

See your users' next steps

To see the next steps your users took, click a data point in the graph. (Data points in a path analysis are called nodes.)

Click a node to expand it and add a new step. Click the node again to collapse it. Nodes that appear in gray are at the end of the user's path and can't be expanded.

By default, the graph shows the top 5 nodes in a step. Click + More to add up to 20 nodes per step. Additional nodes beyond the top 20 are grouped into an "Others" node.

By default, path analysis shows your users' actions working forward from a specific event or page. Backwards pathing lets you select a desired event or page and explore how your users got to it. You can select an event, like a purchase or conversion, and analyze the different paths your users take to reach that event and use that insight to improve the user experience.

To create a backwards path:

You can then configure the rest of the analysis in the same way as a forward path.

Path analysis uses a tree graph to illustrate the event stream, the collection of events users triggered and the screens they viewed.

A path analysis graph consists of the following elements: 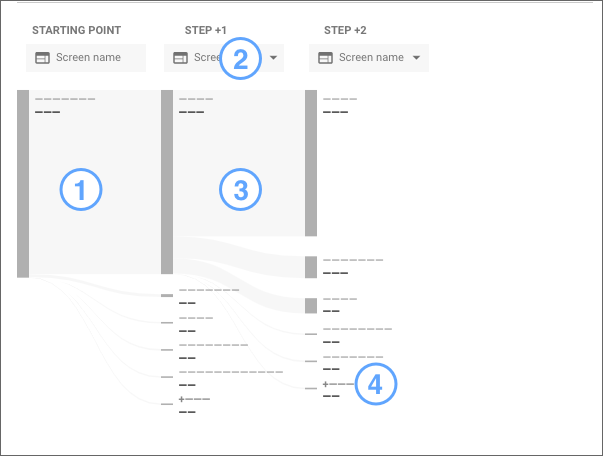 The starting point is the screen or event that begins the path you want to analyze. It appears as the leftmost column in the visualization.

For example, begin an ecommerce path with a page that offers choices for different categories of shoes (e.g., men's, women's, athletic, etc.)

The ending point is the screen or event that ends the path you want to analyze. It appears as the rightmost column in the visualization.

A path analysis can have a starting point or an ending point but not both.

Steps are the columns in the graph. Each step after the starting point or before the ending point represents the successive or previous actions of viewing a screen or triggering an event.

For example, STEP +1 is the list of screens viewed or events triggered by your shoe shoppers after opening the footwear product page starting point.

Nodes are the data points within steps, representing the number of users or events at that point in the path.

For example, the Men's Shoes node in STEP +1 represents the number of shoppers who opened that page, or the number of events that were triggered from that page.

Node type denotes the dimension values you'll see in each step of the graph. You set the node type for the starting point when you create a new path analysis. You can switch node types for a step using the menu above the step.

A path is a specific sequence of nodes occurring across one or more steps, within a specified time frame.

How paths are calculated

These screens and/or events are then aggregated together into paths. The numbers shown in each node represents the total number of users or events that contributed to that particular point in the path.

Paths are calculated from the user's event stream, using the first instance of the dimension value you select as the starting or ending point.

Paths can span one or more sessions, depending on the date range you choose. A new session begins if a user is inactive for 30 minutes. If a path spans multiple sessions, the data for a node is an aggregation of all sessions.

In the same session, a user opens the following screens:

The images below illustrate how path analysis visualizes this user journey, using the first instance of the Home screen_view event as the starting point, and then adding steps as you expand the nodes:

Initial view of the path showing the starting point and STEP +1.

Over the course of a week, in two different sessions, the user performs the following actions:

An initial view of this path for Event count looks like this: 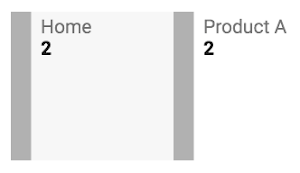 You can explore this path in two ways:

To see the aggregated paths, expand the Product A node. This adds Step +2 and shows each session as its own individual path. 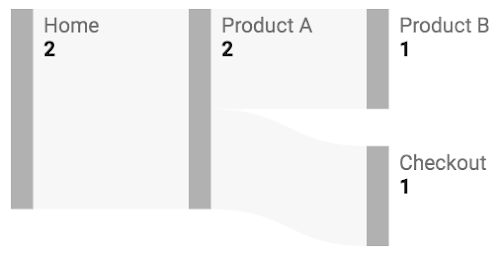 To see the complete cross-session path, expand all the nodes to show the 8 steps following the starting point.

Change the type of data shown in each step

Node type determines what kind of information to display in a step. Use the menu at the top of a specific step to display that node type in that step.

By default, path analysis calculates the event count for each node in the graph. You can easily apply a different metric calculation:

To apply a metric:

The Event count metric counts the number of events triggered for each node of a path. Event count is the result of aggregating across all users and all sessions in the analysis time frame.

The Total users metric represents the number of unique users who viewed a screen or triggered an event in the analysis time frame.

Include or exclude data from path analysis

You can customize the data shown in path analysis to focus on the most relevant information using the following options:

Select which nodes appear in the graph

To choose which nodes appear in each step of the graph:

The values you select determine which individual nodes to display in that step. Unselected values are grouped into the + More node.

To remove a node from the graph, see exclude nodes below.

You can remove nodes if they aren't relevant. Excluding a node only hides it from the graph, but doesn't change how the path is calculated. To exclude data from the event stream before it is used to calculate paths, consider applying a segment.

To exclude a node from the graph:

This option allows you to perform a path analysis that displays only changing values of your nodes.

Segments let you define the subsets of users or events you want to include in or exclude from an analysis. For example, you can explore the paths taken by converting or non-converting users to find out where their user journeys diverge. You could also create a path analysis based on a subset of important events. This is particularly helpful if you have many events in a session but want to see the path across only a specific subset of them.

To apply a segment:

On the left, drag an existing segment from the Variables panel to the segment target in the Tab Settings panel.

You can apply filters to the analysis based on any of the available dimensions and metrics. For example, you can show only paths with a minimum number of users or events, or paths that occurred on selected browsers or operating systems.

Filters are applied to the analysis before the paths have been calculated.

Use a breakdown dimension to see how the path data is grouped along that dimension. For example, you can see user paths broken down by country or device category.

To apply a breakdown dimension:

On the left, drag an existing dimension from the Variables panel to the breakdown dimension target in the Tab Settings panel.

The top 5 values for the selected dimension appear at the bottom of the analysis. Hover over a value to see that value's breakdown in each node. For example, the backwards path analysis below uses the Device Category dimension as a breakdown. Hovering over mobile shows the number of mobile users in each node: 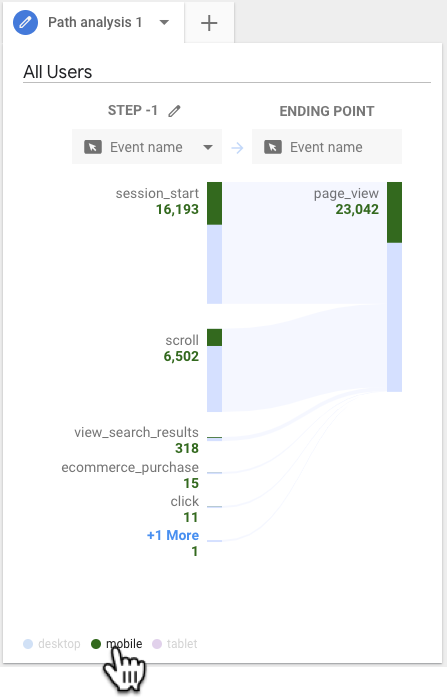 Path analysis is similar to other Analytics features, but offers some advantages: