To better engage YouTube viewers on mobile devices, it's best to create a variety of different video creatives—including square and vertical videos—for your App and Video campaigns.

The video player on the YouTube app automatically adjusts to the dimensions of your video. For example, if you want to show a vertical video (such as a 9:16 aspect ratio), your vertical video will appear larger than a landscape video and will cover 75% of the screen with organic content beneath the video. If a user then selects the fullscreen button, the video will cover 100% of the screen when the device is held in portrait mode.

Benefits of square and vertical videos

If you want your video ads to appear optimally across different devices, it's recommended to use different video ratios for Video and App campaigns:

Important: Aspect ratios between these settings are allowed. On the YouTube app, the video player will automatically adjust to ratios between 16:9 and 9:16.

For both App and Video campaigns, upload different versions of multiple videos across the recommended ratios. For example, you might upload multiple videos of each type (vertical, square, and landscape), with each video having a different message. Run these assets in the same Video or App campaign.

The video player on the YouTube app will automatically adapt video dimensions to the player, whether your video is square, vertical, or landscape.

To help your customers view more of your message in a vertical video, it's recommended that you avoid core messaging in the top 10% and bottom 25% of the video, as these are the areas most frequently cropped. (Check out "How different videos appear on the YouTube app" below). This advice applies to both Video campaigns and App campaigns. 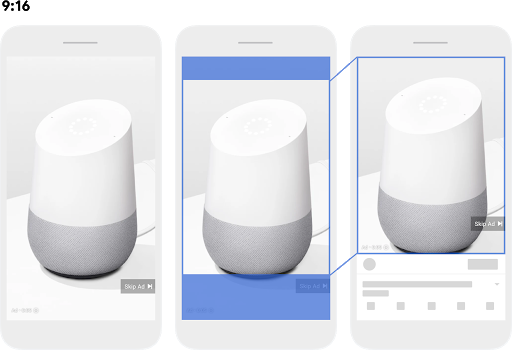 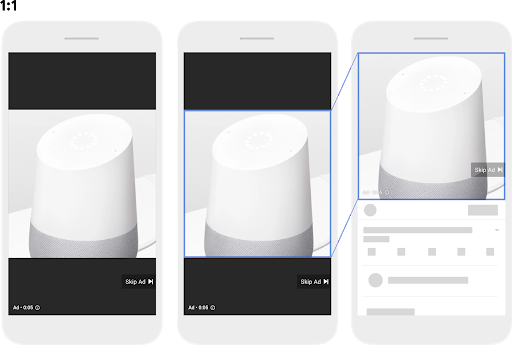 For both square and vertical videos, when the user interacts with the YouTube app, such as by scrolling through related content under the video, the video player can compress up to a 1:1 aspect ratio. This will crop the displayed video at the bottom and top and allow the user to interact with the content they chose below. 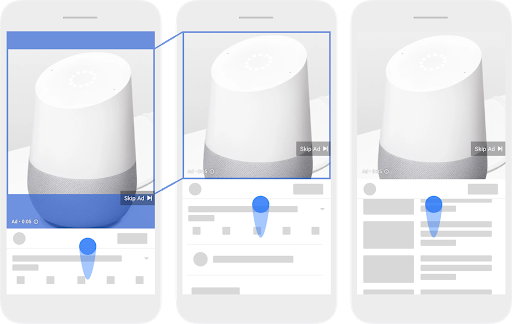 When you have square and vertical videos, you should review your ad performance, bids, budgets and inventory to maximize performance. For square and vertical videos, the 2 metrics "Viewable Rate" and "Viewable Impressions" reflect the viewability of the video player, unlike most video traffic, where the metrics reflect the viewability of the creative. This distinction may meaningfully impact figures for these 2 metrics.

Google Ads can help you make the most of your online marketing efforts with tools to help you succeed. Learn more from success stories to see what others have achieved with the help of the right campaigns for their goals.