Google Surveys offers two panels of respondents: (1) internet users reading content on a network of web publisher sites using Google Opinion Rewards for Publishers, and (2) smartphone users who have downloaded and signed up to use an app called Google Opinion Rewards. The publisher network uses inferred demographics, while the mobile app asks users to self-report their age, gender and zip code.

We evaluate the representativeness of a survey by balancing its sample demographics to match the demographics of the target population: adult (18 or older) internet users. We match based on three demographic dimensions: age, gender, and geography. In the US, we use estimates for the national internet population from the US Census Bureau’s 2017 Current Population Survey (CPS) Computer and Internet Use Supplement. In other countries, we rely on a combination of government data and internal Google data sources.

Google Surveys uses a two-step process to ensure each survey’s representativeness. First, we use stratified sampling to dynamically target respondents with the goal of matching the demographics of the target internet population. Next, we apply post-stratification weighting to more closely match those same demographics of the target internet population.

You can find a full description of the Google Surveys methodology in this whitepaper or in the product overview.

Learn more about the differences between representative samples and convenience samples, and how each option provides relevant data. 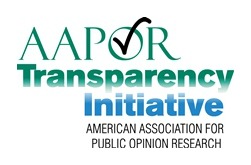 Learn more about how to follow transparency guidelines of AAPOR's Transparency Initiative when using Google Surveys and check out AAPOR’s website.

Was this helpful?
How can we improve it?
true
Search Help Center
//www.google.com/tools/feedback/metric/report
74002