Control access to apps based on user and device context

Configuration groups work a little differently for content-aware access compared to other Google Workspace settings. Information and tips as you design your groups and policies:

Typically, you'll use a combination of configuration groups:

Use your existing user groups

You set the access level for each app (Gmail or Drive, for example)  in the user group. If a user belongs to multiple groups, you set which group determines the user's settings (described later in the Priority section).

Applying access levels directly to user groups is a good option for:

In the Admin console, groups are listed from highest to lowest priority. You change the priority of configuration group by moving the group up or down in the Groups list. Setting priority order is available only in the Admin console and not any of the APIs. 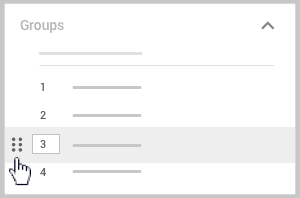 In the Admin console, you can check which group or organizational unit determined a user's app access level. In the example below, the group "Drive Security" set the user's Drive access.

For fine-grained control, you can use groups to customize access levels for each app. For example:

Planning your configuration groups structure is likely the step that takes the most time and review.

Naming and searching for groups

Set a group naming standard for easier searching, prioritizing, and auditing. For example, add a prefix such as "caa" to indicate context-aware configuration group. Also, use a decimal place to avoid editing your existing group names when you add a configuration group.

To track of priority and settings:

You can manage the configuration group in any tool. You might set strict permissions for adding/deleting users, turn off posting to the group, or prevent users from leaving the group (available only in the Groups API).

Before you start: Define the context-aware access levels and create your configuration groups (preferably containing 1 or 2 test accounts).

Changes to the apps access levels typically take effect in minutes, but can take up to 24 hours.

I don’t see the configuration group in the Groups list

Review these events in the Admin Audit log for changes to configuration group settings:

Next: Context-Aware Access examples
Was this helpful?
How can we improve it?