About the Bid Guidance widget

While you set up or adjust your App campaign bids, the Bid Guidance widget can estimate how many installations or in-app actions you may earn with your bidding strategy. For new campaigns optimizing for installations, the widget can also change dynamically to preview the impact targeting changes may have on your new campaigns.

There are two types of Bid Guidance widget: 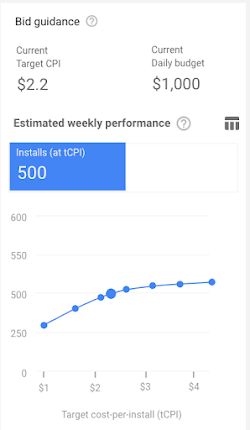 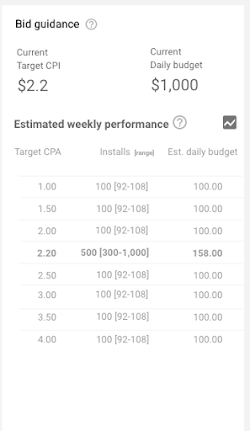 *These images are mocks with dummy data for demonstration purposes

The Bid Guidance widget is a panel that appears when you are creating or viewing the settings of an App Campaign. The widget shows you:

Entering new settings for the campaign can change the estimates in the in-construction Bid Guidance widget. While creating an installs campaign, the widget will change based on the values currently entered for locale (country only) and language.

While editing an installs or an in-app actions campaign, the widget will only change based on values entered for target cost-per-install / cost-per-in-app-action. The goal is to help you anticipate the impact of bid changes, assuming the same campaign and conversion settings.

You don’t need to save the changes to see the new estimates. Seeing the estimates doesn’t mean that your changes are saved. 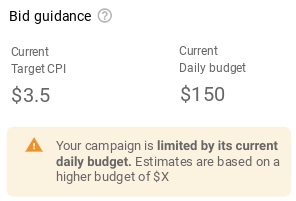 When creating a new App Campaign

When updating an existing App Campaign