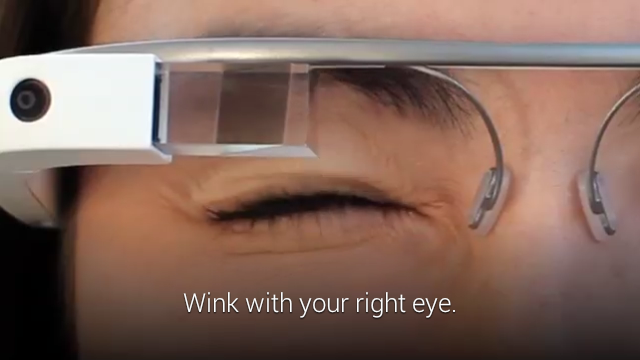 For those times you might miss a shot, try capturing the moment with a wink. The Wink feature is an exploratory feature that lets you take a picture with a wink. It's even faster than the camera button or voice action and it even works when the display is off.

Use your best judgment when using Wink. Be careful who you're winking at and be conscious of your surroundings when you do it. You don't want to give off the wrong impression. ;-)

Wink only works on the latest version of Glass devices. Devices received before October 28th, 2013 won't show the Wink feature in the Settings bundle. If you want to take part in Wink and other future features and accessories, sign up for our limited-time swap out offer.

Make a calculated and deliberate wink. The wink sensor may not pick up a fast wink. For best results, make a mental effort to scrunch the corner of your eye and try to time your wink to a half second.

It doesn't matter what time of day you use Wink, but sometimes Wink will need to be recalibrated if you're squinting in full sun or, conversely, if your eyes are at rest in the dark. If you can't get wink to work in a certain environmental condition, try recalibrating on the spot.