This article applies to customers who have the legacy version of Fiber TV. If you have the new version of our user interface, please view this article on how to watch live TV.

When you turn on your TV and TV Box, it starts playing whatever show is currently on the last channel watched. Press

or ok on your remote control to display information about the current show. 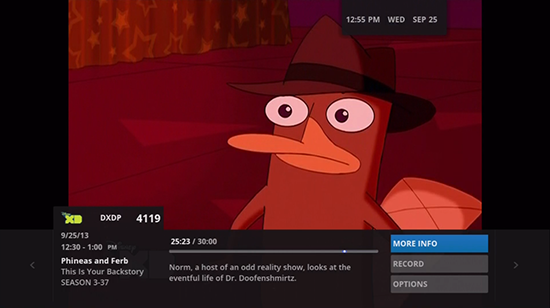 The info bar appears at the bottom of the screen by default whenever a new show begins on the current channel. If you do not want it to appear by default, you can turn it off by customizing the setting.

You can use any of the following methods to change the channel:

When you are watching live TV, you can find the next few shows and the last few shows to be aired on the current channel.

When live TV is playing, the show is always being recorded. So you can use the DVR functionality—pause, rewind—even when you are watching live TV. If you decide you want to record the show, you can press

on the remote control. The recording starts from the time you started watching the show, not from when you pressed

The recordings that you do not explicitly schedule do not appear on the Current Recordings screen. However, if you search for content, the search results might include some shows that were recorded while the TV Box was powered on, even if you did not explicitly record them.

To avoid recording shows that you are not interested in, turn off your TV Box whenever you are not actively using it.

You can set certain temporary display options while watching TV, such as turning subtitles on.