Next: AdMob policies and restrictions

Confirmed click is a product feature that adds a confirmation to ad placements that may be generating accidental clicks. When a user clicks an ad with confirmed click, the user is asked to confirm their intent to visit the advertiser page by clicking a button, such as "Visit Site" or "Download.” 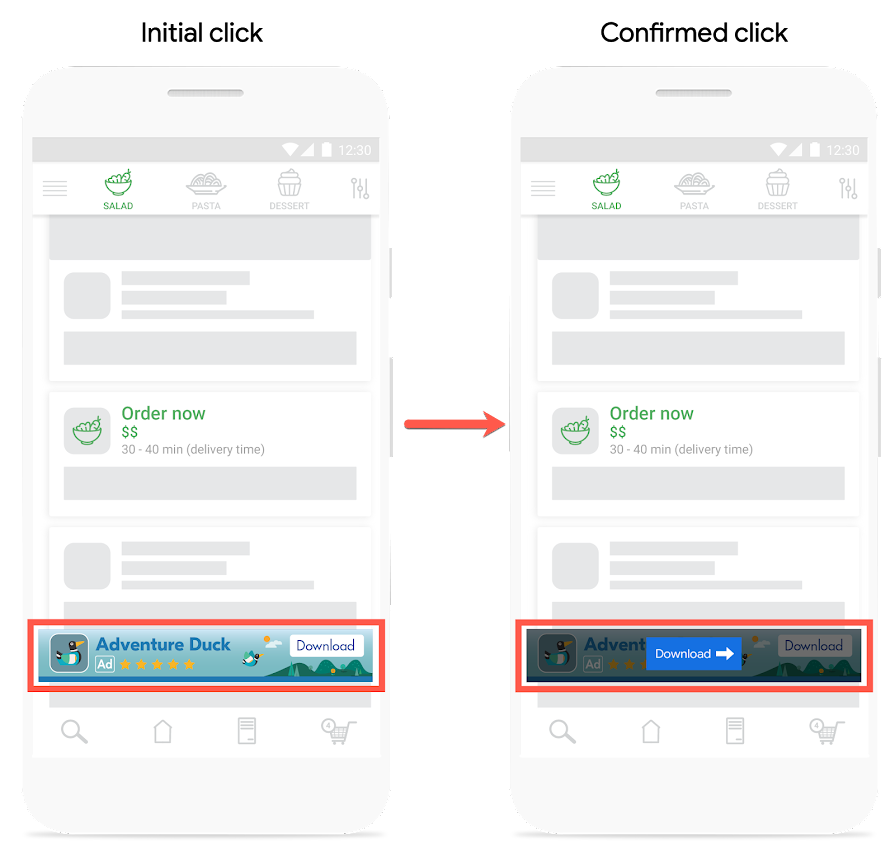 To avoid accidental clicks, follow ad implementation recommendations. Remember to be careful when placing links, play buttons, download buttons, navigation buttons (for example, “Previous" or “Next"), game windows, video players, Down arrows, or applications near ads because they might lead to accidental clicks.

Implementation examples you should review for, include but are not limited to:

Expand all  Collapse all

Where is confirmed click applied?
Confirmed click is only applied if we find ad slots which are causing accidental clicks for users. This change will improve the overall user experience of your site while minimizing any unintended clicks. In the end, less unintended clicks will lead to happier users and better ad performance.
How can I fix accidental clicks on my ad units?

How can I appeal confirmed click?
Google’s ad serving systems automatically apply confirmed click when ad placements exhibit signs of generating accidental clicks. There is no need to appeal; instead, confirmed click is automatically lifted when ad serving systems no longer detect ongoing accidental clicks.
Why has my CTR/revenue/eCPM decreased?
Many factors determine the performance of an ad including impressions, impressions CTR, clicks, eCPM, and others. Lower CTR doesn’t mean lower long-term revenue. Confirmed click aims to improve the overall user experience of your app while minimizing any accidental clicks. Maximizing post-click activity is in the best interest of all parties.
Why was this behavior changed on some apps and not others?
Our system measures click quality based on many factors. Certain content, layouts, and placements can lead to accidental clicks. The system identifies those scenarios and applies confirmed click to improve quality.
I’ve reviewed my entire app and have taken action on my impacted ad units. Why do my ad units still have confirmed click?
The system takes into account data from multiple days of ad serving. When the system detects a sustained improvement in click quality, confirmed click will be disabled from impacted ad units.
Next: AdMob policies and restrictions
Was this helpful?
How can we improve it?