YouTube Premieres is a feature that lets you and your viewers watch and experience a new video together, much like a movie or TV show premiere. Premiering your video allows you to schedule a video upload and create buzz around the video with a shareable watch page.

Note: Premieres can only be created on desktop. However, viewers can watch the premiere on any platform (Desktop, iOS, Android, mWeb, etc.)

Before the premiere starts:

Tip: Viewers are able to set reminders for premieres. Encourage them to set a reminder on the watch page via a pinned comment, in the description or over chat.

When the premiere starts:

When the premiere has finished:

Once a premiere has been scheduled, a shareable and public watch page is created. This page shows the video metadata, including title, description and thumbnail. In addition, the video will eventually be premiered on this watch page URL. Viewers can start interacting through Comments and Live Chat before and during the premiere. 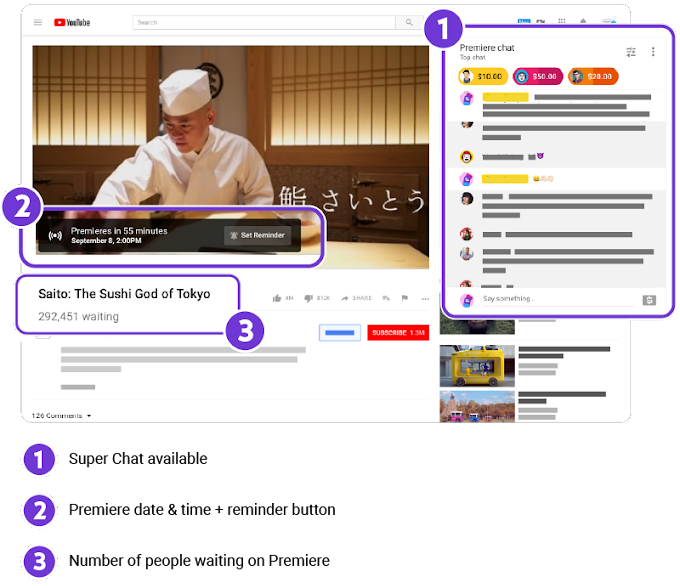 There are a few ways you can earn money from premiering your video:
Ads:

Learn more about enabling ads on your video.

If eligible, you can take advantage of channel membership perks – such as members-only live chat, custom emoji and loyalty badges.

What happens to a video after it has been premiered?

After a video is premiered, it remains on your channel like a normal upload. Chat replay is available for viewers who want to experience the premiere chat after it has ended.

How do viewers find my premiere?

A public URL is created when the watch page is created. You can share this URL before, during and after the premiere to share the video.

Can I schedule a premiere to start immediately?
Yes. If you want your video to be available immediately, mark it as 'public' when selecting a privacy setting, which will start the premiere as soon as the video has finished processing.

What analytics are available for premieres?
Creators can view analytics related to premieres using our standard YTA tool.

Once published, can I unselect the toggle for premiere and make this a standard upload?
No, not once the video has been published.

How will viewers discover my premieres?
Premieres show up across YouTube's discovery surfaces just like normal uploads, including search, the home page, Watch Next and video recommendations. In addition, because the watch page is public before the premiere begins, you can share the premiere page URL on social media, put it as your channel trailer or generally promote it in whatever way you like.

Can you turn Super Chat on/off for a specific premiere?

No, you'll need to turn it on/off for your channel. Learn more about how to turn Super Chat on/off.

Can I set a video from private or unlisted to a premiere?

Yes, but you need to set your video as public and scheduled, and then set it as a premiere. If the video was ever set as public, you cannot premiere the video.