Motion paths let you animate objects moving along curves and complex shapes. Similarly to lines drawn with the pen tool, you define motion paths by setting anchor points which are then connected by straight or curved lines.

Motion path animation is approximated by CSS, so animated elements may not exactly follow their motion paths. Generally the difference shouldn't be noticeable (by default, less than a pixel), and you can limit the extent of the deviation in the motion path properties.

Select a single element or group to see lines indicating where it will move during animation, along with the anchor points.

You can only view one motion path at a time.

Control handles are visible when the Motion path tool

Motion paths can be simple curves, closed shapes such as polygons and circles, or detailed outlines of other objects. To change the shape of a motion path:

You can move, resize, flip, or rotate motion paths by selecting the Motion path tool

then checking the Transform control box in the tool options bar. With this option enabled, the transform controls display when you select an element with a motion path.

Drag the motion path to a new position on the stage.

Control the speed of an object along its motion path by changing the timing of the thumbnails or keyframes and the easing between them. You can also loop motion path animation.

in the motion path properties. This process can take more time than automatic optimization.

Google Web Designer displays the estimated size of the selected element's motion path in the Properties panel, reflecting how much disk space the motion path will take after publishing the document. 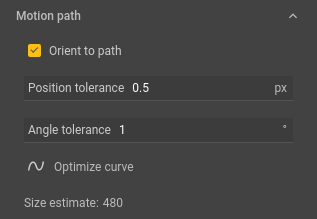