Next: Overview of creating and managing social engine accounts

If you don't send social metrics to Search Ads 360, you won't be able to see the number of clicks, impressions, and cost associated with your social ads (but you'll still be able to see visits and Floodlight conversions).

The steps you take to import performance metrics depend on the social engine and PMD you use:

After you onboard a social engine account, Search Ads 360 can start attributing visits and Floodlight conversions to your social ads. You don't need to import this data since Search Ads 360 collects it for you.

When you use Search Ads 360 to report on social campaigns, you'll see the number of conversions attributed to each social campaign, ad group, and ad. You can also see this information in Campaign Manager Paid social reports and attribution reports. And because you're using a single system—Floodlight—to track conversions, all of the visits and conversion data is de-duplicated regardless of how many channels contributed to the conversions.

Tracking when using a PMD 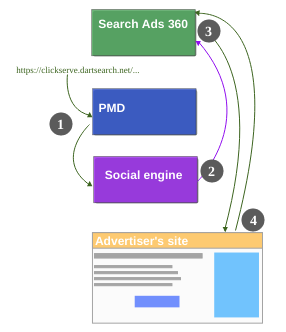 Tracking without a PMD

Here's how Search Ads 360 tracks visits and conversions if you don't use a PMD: 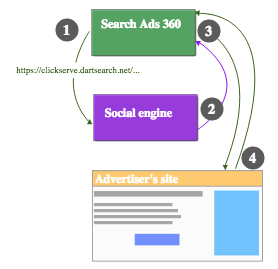 Instead of requiring you to manually recreate your social campaign and ad group structure in Search Ads 360, Search Ads 360 automatically creates campaigns, ad groups, and ads as reporting metrics become available (either through importing performance and engagement metrics or click tracking).

Note that these items in Search Ads 360 are for reporting purposes only. You can't view or change their settings from Search Ads 360.

Names may be shortened in Search Ads 360 reports

To prevent its tracking URLs from becoming too long, Search Ads 360 sometimes limits campaign, ad group, and ad names to 20 characters. The names are not changed in the engine itself. The shortened names only appear in Search Ads 360 reports and Campaign Manager reports.

If the shortened names aren't unique, use the engine ID or Search Ads 360 ID to distinguish campaigns, ad groups, or ads.

Next: Overview of creating and managing social engine accounts
Was this helpful?
How can we improve it?
true
Search Help Center
//www.google.com/tools/feedback/metric/report
263