Next: About responsive search ads

Expanded text ads present more information about your products and services and get people to click your ads. While optimized for mobile screens, the appearance of an expanded text ad on desktop browsers is similar to the mobile display. 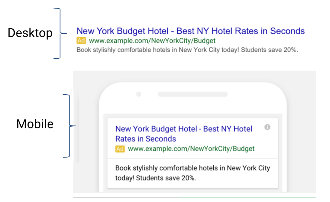 Other ad properties, such as URL templates, remain unchanged.

See the following table for details:

Only Microsoft Advertising engine accounts that have migrated to Upgraded URLs can create expanded text ads from Search Ads 360.

If you haven't migrated your account to Upgraded URLs, you can sign into Microsoft Advertising and create expanded text ads (or import them from Google Ads), but note the following limitations in Search Ads 360:

You can only create and edit expanded text ads in your Microsoft Advertising accounts if they've been migrated to Upgraded URLs.

If you want an all-device ad copy test to include expanded text ads, the ad group can contain the following ad type combinations:
Known issues

In all engines except Yahoo! Gemini, Search Ads 360 generates a preview of the display URL. Some of these preview URLs might not match the display URL shown in engine itself.

This will not affect ad serving, quality score, or approvals.