About reporting on mobile app promotions

Next: About Google Ads app extensions in Search Ads 360

When customers view or click your ads in a "Mobile app installs" campaign or your app extensions, Google Ads reports impressions, clicks, and cost, just like any ad or extension. You can view the engine metrics in Google Ads or Search Ads 360 without any additional steps.

To track activity that occurs after a click, you need to set up conversion reporting. The steps you take depend on the operating system of your app (Android or iOS), the type of store, and the type of conversion you want to track.

As of April 1, 2018, Search Ads 360 can no longer track new conversions promoted by existing app installs campaigns (neither for Android apps nor for iOS apps), but you can still access these campaigns to see conversions that were recorded while Google Ads still supported the campaigns.

Before reviewing reporting options, it's important to clarify that "installing" a mobile app can be measured in two different ways: 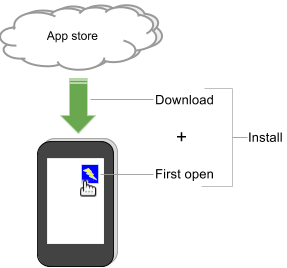 If your intent is to show advertising ROI, downloading an app from the app store isn't particularly meaningful from an engagement point of view. Instead, focusing on first open conversions is a better reflection of value than pure download.

For each type of mobile app conversion, the following tables show which conversion-tracking systems are available for each operating system. Click the links for details.

Have feedback on our mobile documentation? Give us your feedback!
Next: About Google Ads app extensions in Search Ads 360
Was this helpful?
How can we improve it?
true
Search
Clear search
Close search
Google apps
Main menu
Search Help Center
true
263
false