Before you begin to setup your feed, it is important to understand the following terminology:

The following example of dependent selection utilizes Accurate Geo Type and Placement ID to determine the appropriate model and message to show a user.

The Geo Feed is one of the two parent Feeds. It filters on Accurate Geo Type (labeled "geo" below) to select a value from the Controlling Column (geo_id) that is later used as a geo proxy.

The Model Feed is the second parent Feed. It filters on Placement ID (dcm_id), which is used as a proxy for model, to select a value from the Controlling Column (model).

The Geo Feed and Model Feed inform the child feed's Message Feed, which filters on the model and geo_id columns. Based on those filters, Studio selects a row of that feed. 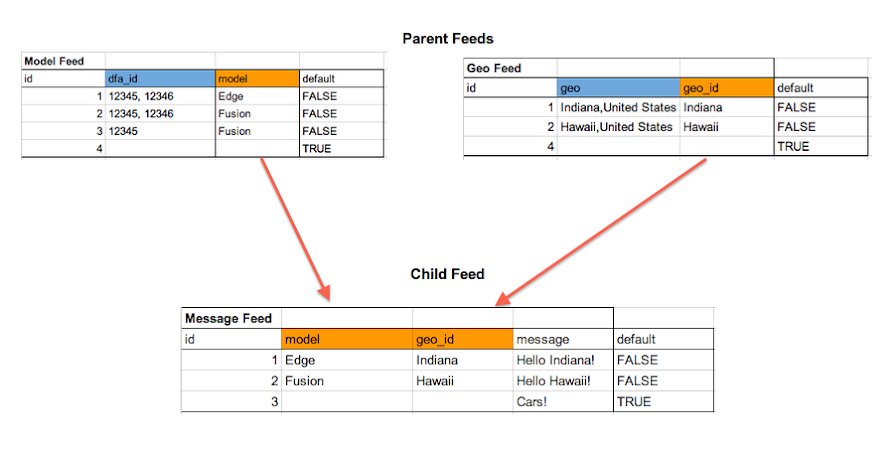 Follow the below instructions to setup your Studio profile for use with dependent selection:

How do I implement defaults in Dependent Selection?
In the Parent feed, specify the Default row using Boolean logic in the same way defaults are set in strategies without Dependent Selection. In the Parent Feed, leave the cells in the Filterable and the Controlling Columns empty for the default row. In the Child feed, specify the default row and also leave the filterable columns empty.

How many levels of Dependent Selection can I use?

Currently, you can use three levels of Dependent Selection--Parent, Children, and Grandchildren feeds.

Is there a limit to the number of feeds I can associate with a Dependent Selection profile?

No, the only limit is related to the levels of feeds (For example, five different dependent selections attributes could pass to 3 different child feeds.) There can be Parent, Children, and Grandchildren feeds, but the number of them is not limited.

Can a Profile that uses Dependent Selection utilize feeds that are not dependent upon one another?

How do I preview with a Dependent Selection profile?

How many values can be passed in any row of the Controlling Column?