Multivariate testing (MVT) helps you understand the interactions between multiple sections of a page by testing them together in a coordinated way.

For example, the multivariate test below is useful for identifying the best headline (H1 vs. H2) and hero image (A vs. B vs. C) combination to use on a landing page. 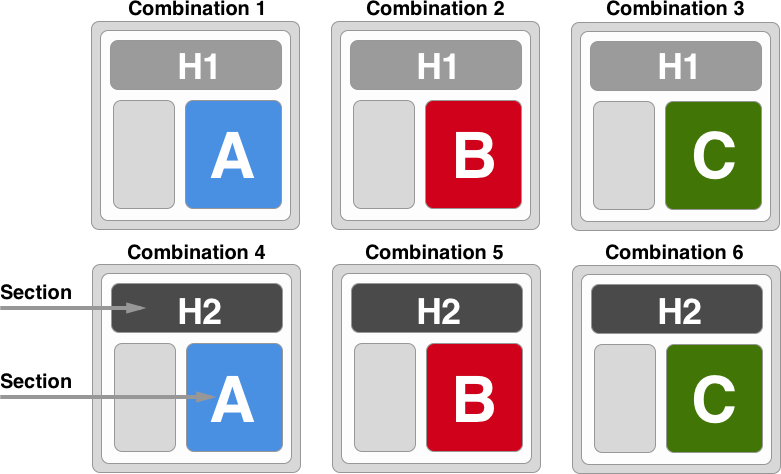 There are several key terms that you need to understand before creating a multivariate test.

To create a multivariate test:

The Google Analytics Property field is automatically populated from your linked Analytics property.

A section is a single element of a web page (e.g. a button or an image) that is modified to create variants. An A/B test contains one section (with one or more variants). In a multivariate test, multiple sections are tested at the same time (e.g. a button and an image).

After clicking CREATE, Optimize will present you with the section and combination picker. Optimize uses the Editor page that you entered above as the Original and creates two sections (A and B below) to get you started. Multivariate tests require at least two sections, each with at least two variants (the original and one new variant).

To create a new variant:

If you create one variant in the Headline section (“Headline 1”) and two variants in the Image section ( “Image 1” and “Image 2”), you’d have a total of six combinations. 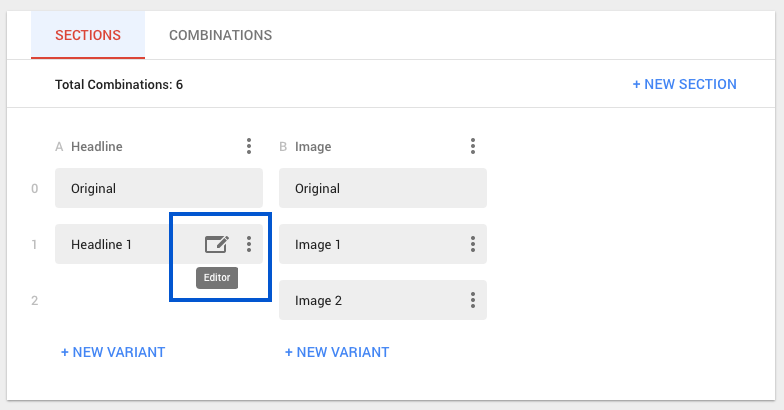 Hover over a variant and click the Editor button [

] to open it in the Optimize visual editor. Delete a variant by clicking on the more menu [

] next to the variant’s name, then on delete.

Use the visual editor

After being directed to the Editor Page URL you entered above, you'll see the Optimize visual editor which consists of two components: the app bar (at the top of the page) and the editor panel (in the lower right). To create a variant:

To create a new section:

Change section and variant names by clicking on them and editing the name field.

] next to any variant to preview it in a new tab. 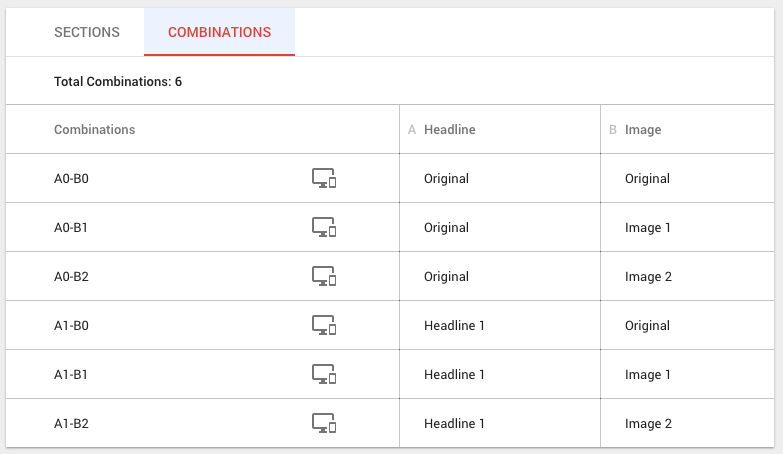 Click START EXPERIMENT. When the status field says Running, your first experiment is running live on the web. (Most updates happen within a minute.)

How long should your experiment run?

Keep an experiment running until at least one of these conditions has been met:

To monitor a running experiment or see the results of a concluded experiment, click the Reporting tab at the top of the experiment detail page. The report page is broken down into a series of cards that contain data about your experiment, including its status and how your variants perform against your objectives.

Unlike A/B and redirect tests where you might deploy a single variation, MVT allows you to deploy a combination of variations. The Optimize MVT report will help you answer the question “Which combination, if any, should I deploy to realize the greatest improvement?”

The first card in the Optimize MVT report is the summary card which displays the status and performance of the experiment. It includes the following:

The values in parentheses under improvement are modeled metrics showing the expectation and 95% intervals. Based on the Optimize model, there's a 95% chance that the actual improvement (or conversion rate) will fall within the range in parentheses.

The second card in the Optimize MVT report is divided into two parts. The top part displays the performance of your combinations against the objective that you picked during setup (Goal 1 completions, in the example below). You can toggle combinations on and off by clicking the blue checkbox next to each combination name.

The chart at the bottom of the card is your conversion rate over time, which graphs the performance of your combinations. The shaded areas in the graph at the bottom of the objective detail card represent the performance range that your original and combinations are likely to fall into 95% of the time. The line in the middle of a range shows the prevailing direction of your experiment.

You should expect the ranges to converge/shorten over time as more data is accrued. However, that's true of the conversion rate range for both the original and the combination, so a narrowed range isn't directly linked to a higher Probability to beat baseline. The conversion rate range should narrow over time even if a variant's Probability to beat baseline is low/zero.

In this video we'll show you how to create a multivariate test (MVT) in three easy steps: