/maps/community?hl=en
This content is likely not relevant anymore. Try searching or browse recent questions.
Jim Barchuk
Jim Barchuk Original Poster
11/30/21
Faulty road information produces faulty route.
0
I'm reporting this here because I don't see a way to report it within Maps. To understand the problem requires viewing a route produced by Maps, https://goo.gl/maps/UkM6L9JtSqekn8Ah6
These roads are inside a manufactured home park that Maps hasn't accessed and recorded, so Maps can operate only by publicly available info. (Routes that leave the park or originate outside also produce the same error, so it's not an error exclusive to inside the park.)
The route is obviously absurd. I said 'faulty road info' in the title because it must be caused by some road information or status that prevents Maps from producing a correct route, such as a road being closed or one-way.
CLUES: I've had two Uber rides since moving here. I don't know what nav system they used. One bringing me inbound worked fine. One coming here to pick me up didn't even get in the park. His nav took him to a road outside the park, public road, but very near my house inside the park. I actually saw him drive by but he figured out in a minute and turned around and got in the park properly.
I've had other vendors come to the house, some had correct routes, others had incorrect routes.
The point being that different routers are using the same public information but coming up with different answers. None of us can control the park allowing access to Maps or not. All we can do is fix what we've got.
Details
Directions and Navigation, Android
Pinned
Locked
Community content may not be verified or up-to-date. Learn more.
Latest Update Latest Updates (0)
Recommended Answer Recommended Answers (0)
Relevant Answer Relevant Answers (0)
Our automated system analyzes the replies to choose the one that's most likely to answer the question.
All Replies (10)
सीके _
सीके _ Gold Product Expert
12/2/21
Recommended Answer
Relevant Answer
Hi, Jim Barchuk
Welcome to Google Maps Community Support Forum & thanks for your post & thanks for pointing out a discrepancy in navigation.
I find, at present, Maps considers vehicles can't take a right turn at the intersection of Spillman Dr with Cayman Cir.
Then, Maps shows a detour via a longer route.
Similarly, Maps is not allowing a left turn from "Cayman Cir" to "Spilman Dr".
However, although there is a stop marker on Spillman Dr, there is no such marker on Cayman Cir, but the white median marker has a gap there.
So, can you confirm whether a left turn is possible from "Cayman Cir" to "Spilman Dr"?
That will help in suggesting a suitable solution for both the discrepancies.
----------
PS: In this peer support forum, volunteers answer the queries.
The volunteers are users of Google Maps like anyone.
Google employees or representatives aren't reading the posts usually.
Google user
recommended this
Original Poster
Jim Barchuk
marked this as an answer
Recommended based on info available
Our automated system analyzes replies to choose the one that's most likely to answer the question. If it seems to be helpful, we may eventually mark it as a Recommended Answer.
Helpful?
Jim Barchuk
Jim Barchuk Original Poster
12/2/21
Recommended Answer
Relevant Answer
Hi and thanks for the reply. I'm a new resident at this park and noticed the problem the first time I came here. I'm extremely surprised that this problem exists, that no complaints (if any??) have had any effect.
I understand what you're asking for but the problem isn't just turns, it's a lower level connectivity problem with the road Cayman Cir.
Here's another example route that uses no turns as such, using # addresses only on Cayman Cir. The issue is that the circle that is Cayman 'disconnects' in a sense at a point between Spillman and Oak Grove, so it's not a complete circle any more. Meaning, the router can't 'see' that one can drive Cayman Dr in a complete circle, when in reality one can. https://goo.gl/maps/43aCZJ77KgGC7FtV9
The attached image may have clues. This is the county appraiser record. Cayman and Oak Grove Dr are some of the oldest in t he park. Cayman probably at first was not a complete circle, so something about that may have carried across. The highlighted area includes a park entrance t hat isn't used now, though it might be used for bringing mobile homes in and out.
On the right side there's a box with 'item' data. The name is Friendly Ave which is obviously incorrect. However there *is * another Friendly Ave in the county which *might* cause some sort of data interference, the upshot of which is unpredictable (bugs.)
For example, way-back-when, Cayman was not a complete circle. When the road was completed, something in the county road data is incorrect or incomplete, causing Maps to produce a 'wrong' route. With Google vehicles never having surveyed the park, that bad data was not overridden / overwritten by 'reality,' so the road still appears to be an incomplete circle. 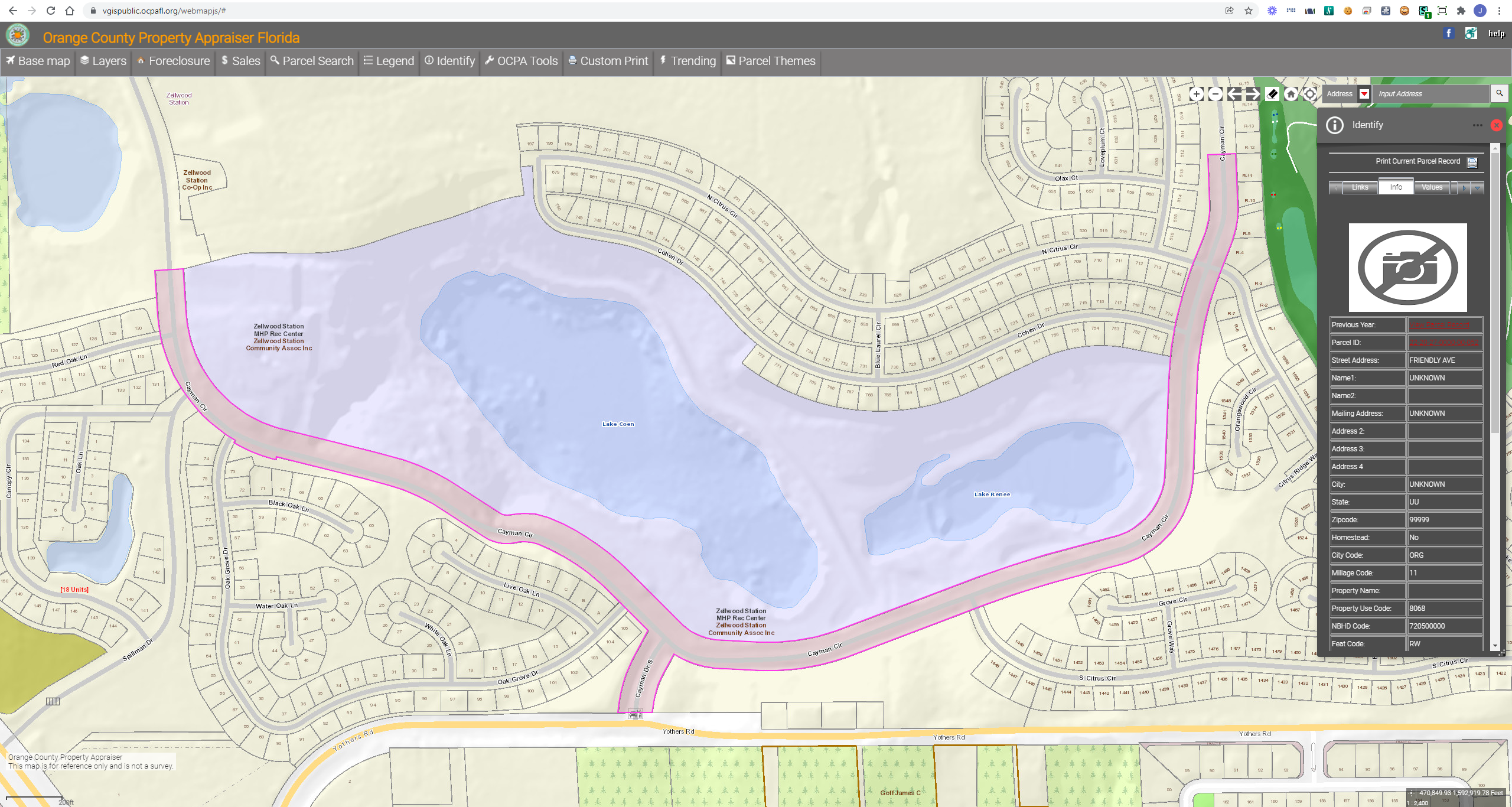 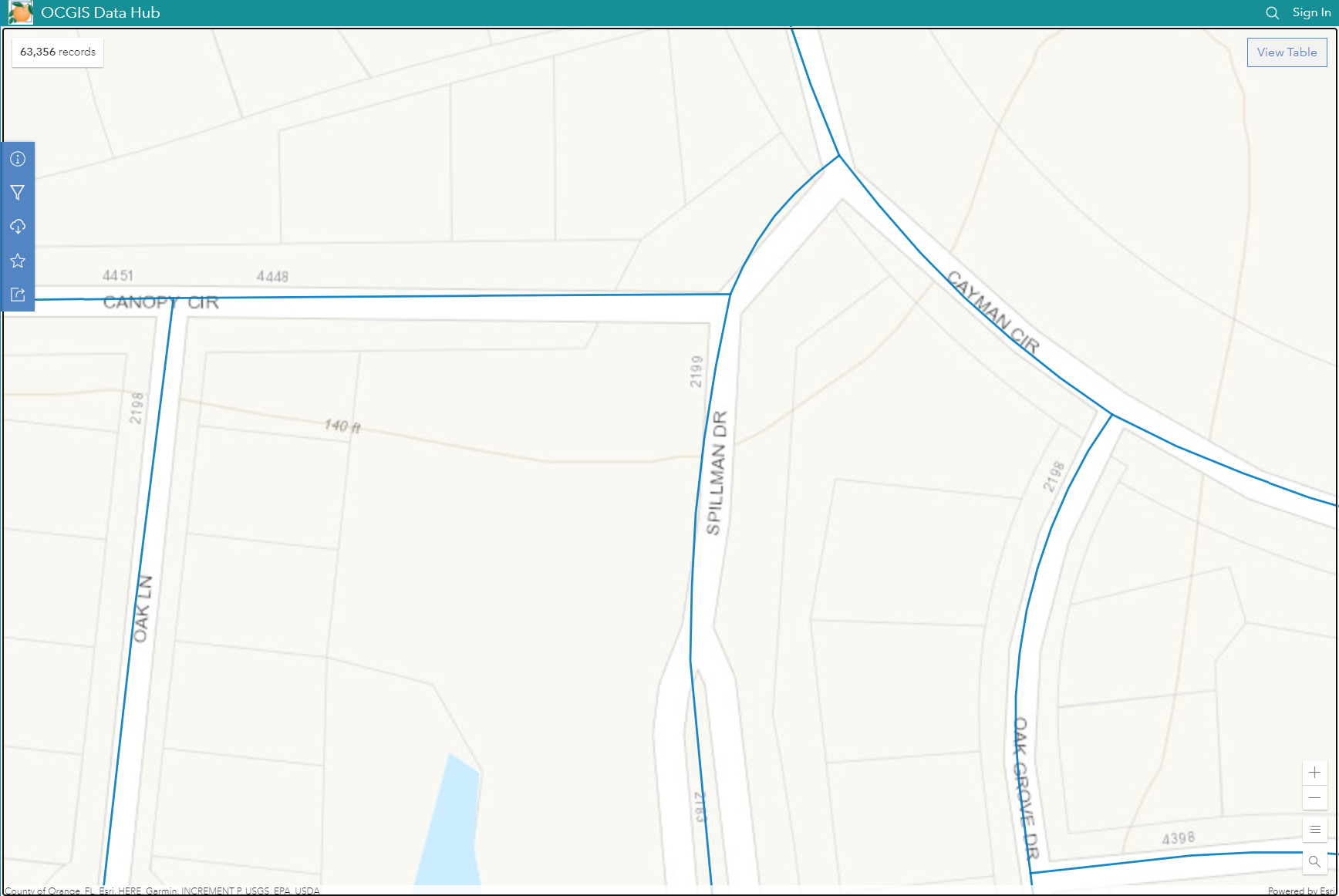