Navigations SENDS YOU THE WRONG WAY DOWN A DUAL CARRIAGEWAY!

I am reporting this publically because in the past I reported that the little access road to where I live was a small winding road that went to nowhere, and the twit at Google actually went and renamed the road to be pretty much that DESPITE the unlikelihood of a French country road having a name in English (and me not asking for that in the first place). Several attempts to edit this in the maps editor have resulted in nothing, as has attempts to place my house where it really is and not half a mile up the road. Obviously it is Google who decides where things are and the people that live in these places clearly don't know where anything is! I'm being vague, I don't plan on giving my exact location to World+Kitten. If somebody from Google wants to discuss this properly, I'm sure they can pull an email address from my posting.

Here is the navigation prompt: Here it is on the mobile version of the map: And here is an example route that demonstrates this:


We drive on the right in France. That's a dual carriageway.
Congratulations! You are instructing people to drive down the on-ramp and then turn and drive headlong into on-coming traffic.

The correct route is to cross the road and turn down the diagonally opposite ramp at the second roundabout.


PLEASE FIX THIS BEFORE SOME WALLY ACTUALLY FOLLOWS THESE INSTRUCTIONS!

Community content may not be verified or up-to-date. Learn more.
All Replies (12)

3/26/13
GMapperHF
Thank you for reporting this issue.

If I am understanding your post correctly, the following road segment is incorrectly listed as "two way" when it should be "one way":  http://goo.gl/JLsVD

If that is the case, you can apply the edit directly yourself at the Map Maker link I provided.

Once the edit is approved in Map Maker, it typically takes about another 2 or 3 months before Google performs their next "directions synch".
3/26/13
Original Poster
ドキドキ

Thank you for your prompt reply. Unfortunately I do not feel competent to make the required modifications using Map Maker. The problem is that, having looked at the options in Map Maker, it may be that a second parallel road would need to be created. I also have a great problem with the " it typically takes about another 2 or 3 months".

Please allow me to explain. I don't wish to be seen as an impatient jerk. I think you may have not understood me. That's okay. I discussed this with my mother and she said that Americans most likely wouldn't know what a "dual carriageway" is (she is herself an American). She said I should tell you:

Google Navigation is sending people the wrong way on the beltway.

The road is 2 x 2-lanes with a central divider. On each side, traffic can only flow in one direction. Traffic speeds are between 90-110kph which is roughly 60-70mph. Essentially it is like a freeway with only two lanes in each direction.

I hope now you can understand why I feel this is a critical issue and why instructing people to go the wrong way on to this road would be spectacularly bad.

Unfortunately it is a new road, so it doesn't show up on the satellite imagery at all, and the streetview cameras only captured part of it being built; however I hope the image copied below will help to give an impression of what sort of road this will be.

See it on Google Maps here: http://goo.gl/maps/Wk9dz
If you have any contacts or influence with Google's Map people, please try to get this expedited so that it doesn't remain in such a (dangerous!) state for the next 2-3 months. I have made a partial edit with an explanation and link to this forum; and I have also reported it as incorrect data with a link to this forum.

I do understand the term dual carriageway....no problem there.   The quickest way to fix it is via Map Maker.   If you are not comfortable with MM edits, suggest you report to Google via the "report a problem" link at the lower right corner of the map window.  Include a link to this thread in your problem report.   Unfortunately, there really is no way to expedite the process of updating directions.

I would try to help you with the MM edits, but I'm not 100% sure of exactly what the issue is by your description.   That's why it is better for somebody with local knowledge to apply the edit.  I think if the parallel carriageway started just the the west of the interchange and ran (at least) to a point east of the interchange....and all the on/off ramps were adjusted accordingly, your issue would be solved.   Does that sound right?

3/27/13
GMapperHF
BTW:  If my last post did correctly describe the issue/resolution I will try to give you a hand on this, but it is best (for now) to "undo" your pending edit in Map Maker.   The "physical divder" will not apply to the single carriageway....Undo-ing that edit will speed to process of getting the parallel carriageway in place.
3/27/13
Original Poster
ドキドキ
Hi,

However, yes, marking that section of road as a parallel carriageway and amending the ramps accordingly should fix the problem (the rest of which is parallel and not is not of consequence to navigation so can be edited later).

In order that you may apply this, I have undone my edit.

3/27/13
GMapperHF
I have started drawing in the parallel roadway, but this will need to be done in steps.  As each edit gets approved, we can draw the connecting segments and delete the incorrect remnant ramps.   You can help by reviewing the edits and recommending them for approval (or letting me know if I don' t have it quite right).
3/27/13
Original Poster
ドキドキ

Looking good, I've marked this as such.

In order to help, I have made a diagram of how the junction works. Sorry, I'm no artist! ;)

We (in Britain and France at least) don't do cloverleaf junctions. We're infatuated with roundabouts. 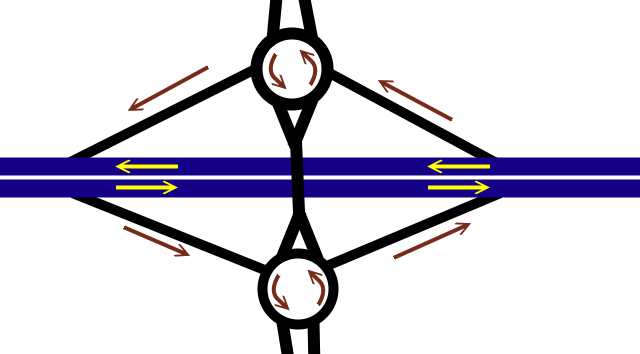 Hope this helps explain what is going on.

Just a quick note - it looks like you may need to make the high-speed part slightly longer (and merge it into the existing left-to-right road for now?), as it looks like it might go from ramp to ramp? It is hard to tell as I see slightly different things at the different zoom levels. Otherwise, looking good.

Thank you for your assistance!

3/27/13
GMapperHF
All in time.....need to get the initial edits approved before extending both ends and deleting the extraneous ramp segments.
3/28/13
Original Poster
ドキドキ
Hi,

Sorry, I made a mistake due to misremembering. The road is one lane on each side (not dual).
However everything else stands, it is a two-lane road that splits into separate carriageways to pass under this bridge, so the ramps cannot be used in a reverse sense, and the speed limit on this road is 90kph.
So everything as planned, only it is single-lane on each side.

To help you better understand how this is, I have posted a YouTube video (coming onto the road from the north). You can watch it at http://www.youtube.com/watch?v=U6xYWKqZc2A and I have added some annotations as well. ;-)

3/29/13
Original Poster
ドキドキ
And here's a shorter one showing the return journey... http://www.youtube.com/watch?v=VTeQzU1EmE4

Remember it will likely take 2-to-3 months for Google directions to begin using the new segments.
Were these replies helpful?
How can we improve them?
This question is locked and replying has been disabled. Still have questions? Ask the Help Community.