This document describes how to configure Google Global Cache (GGC) nodes to operate with your Carrier Grade NAT (CGN) systems. Once configured, this allows traffic between the GGC node and private user IPs to bypass the CGN.

GGC has no requirement that "private IP space" be in the RFC1918 allocation. Any non-internet-routed space in use in your network can bypass a CGN with this configuration. If appropriate for your usage, we recommend using the dedicated '100.64.0.0/10' CGN space allocated in RFC6598.

The following figure shows a hypothetical network topology used as an example for this document.

Traffic between the users in the private IP space and the general Internet is NAT'ted. A route will be added to allow traffic between these users and the High Traffic IPs in the GGC sub-net to bypass the CGN.

Google will provide you with a list of High Traffic IPs for each GGC node. 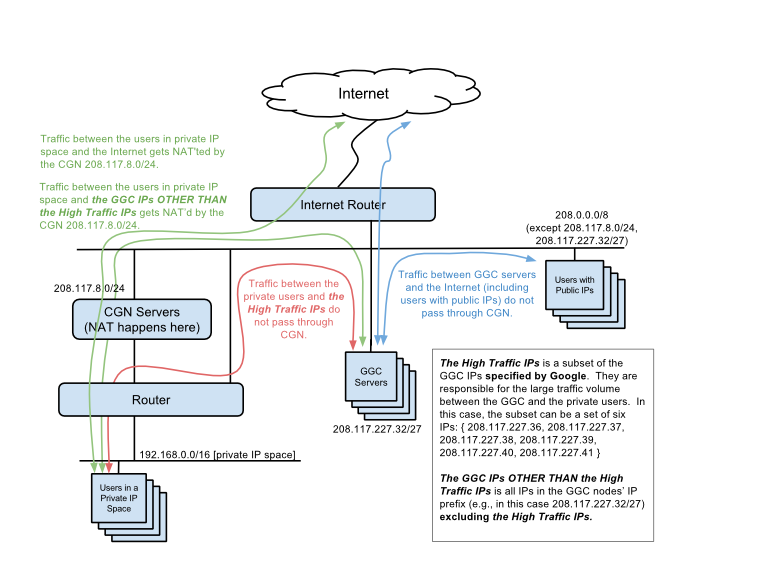 In the route illustration above:

Do not configure private user IP addresses to bypass the CGN until you have received confirmation from Google that the GGC nodes are ready for CGN-bypassed traffic. Changing your routing without prior approval is likely to lead to very poor performance for users. It may even cause complete failure for some user requests.

In the example network, the advertisements would be:

Google requires all GGC nodes in the same GGC Network Location (GNL) to have the same prefixes and community tags advertised to them.

A GNL is a set of GGC nodes serving the same users, with the same failover policy.

If you have multiple NAT devices in the same GNL, you must ensure the following:

You can configure these community tags now. Until Google verifies CGN support for the node, and you reconfigure your routing, users will continue to be served via the public IP addresses of your CGN servers.

Changes to your BGP configuration may take up to 2 hours to be seen in all Google systems.

For more detail on use of community tags, please see BGP Community Support for Google Serving.

Once you have planned your network topology and added community tags to your BGP advertisements, inform GGC Operations that the node is ready for CGN support by emailing ggc@google.com.

Include the following information:

Google will verify your prefix advertisements and the GGC node configurations.

We will then provide you with:

Once Google has verified CGN support for the GGC nodes in this GNL, we will let you know that it's ready for CGN-bypassed traffic.

When we've done this, you can then re-configure your routing, for all nodes in the GNL.

You should ensure that all traffic between private user IPs tagged with 15169:12100, and the High Traffic IPs on the GGC servers bypass the CGN.

Let us know when you've made this change, and we'll verify that we see traffic directly from private user IPs.

Follow the procedure below to play a test video. If the system works as intended, the video traffic should be served from the GGC node, bypassing the CGN. This procedure is similar to the test procedure in the Google Global Cache - Install Guide.

The test below was made with Google Chrome version 7.9. running in Debian Linux. Output from other Chrome versions, or other Operating Systems, may look different.

Using Google Chrome from a PC in one of the tagged private user IP ranges:

This image shows output from the Chrome Developer Tools while performing the video playback test described above. 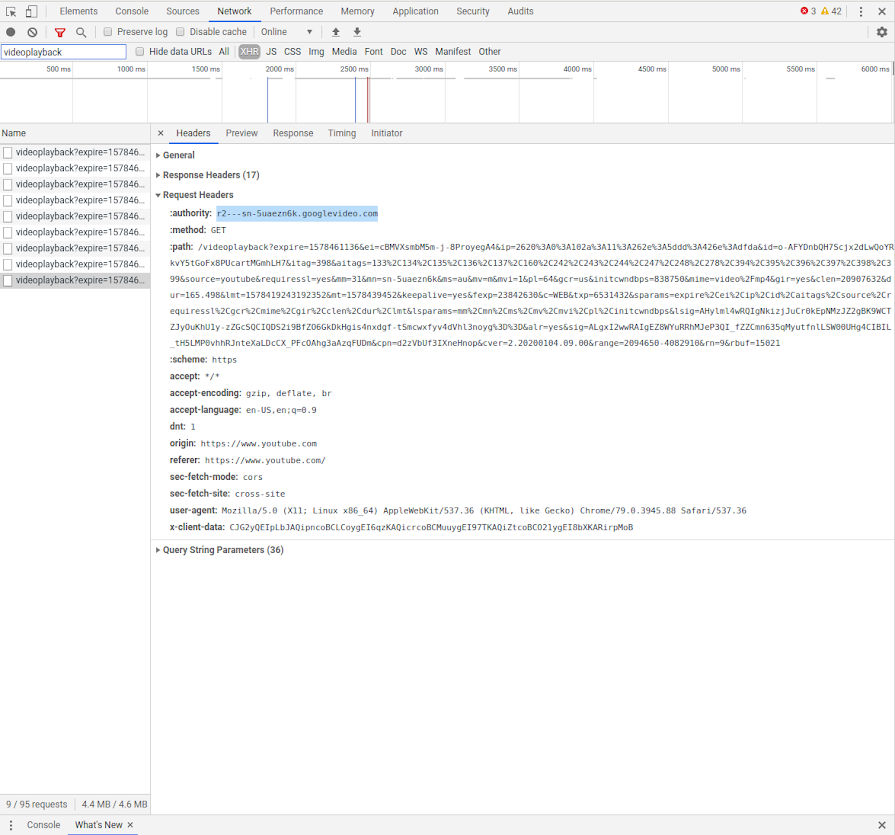 The video playback test described above was made with Google Chrome version 7.9. running in Debian Linux. Output from other Chrome versions, or other Operating Systems, may look different.

The base web pages of www.youtube.com may not be served from the cache. These host names will typically not resolve to the GGC node, and will not bypass the CGN.

The following URL gives information on how Google systems see your IP address. This will assist us in determining if CGN-bypass is working correctly.

https://redirector.googlevideo.com/report_mapping?di=no displays the public address of your CGN servers, and the GGC node name.

Adding /debug_info (https://208.117.227.36/debug_info) and navigating to the URL in your browser should display your private IP

Check that the response includes a tagged private address for client_ip and has private_ip_ranges match: true