To check the battery level while using Glass, swipe back from your timeline until you see the Settings bundle.

Battery Charged indicates that your Glass is fully charged. 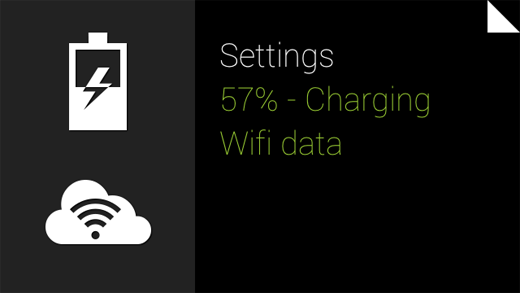 The connectors of the cable and charger are two-tone so you always know which way to plug in the USB. On Glass itself, the cable is at a right angle facing backward (the white half of the connector facing out) so that the base of the connector can be used to stabilize Glass on a flat surface while charging.

Extra chargers are available for purchase in the Play store.

While Glass is plugged in, pressing and holding the power button for 15 seconds triggers a hard power down. The LED light turns off and Glass will not charge when hard powered down.

Charging Glass automatically turns on the device, even if it was powered off before plugging in. To power down while charging, press the power button for 3 seconds. You'll know it's still charging if the LED light pulsates.

If you haven't charged Glass for a couple of days/weeks, it may take longer to charge Glass. In this state, it's normal to not see the empty battery icon on the display. It's also normal that Glass won't turn on when you press the power button. But don't worry. Grab a cup of coffee and return in a bit, and Glass should turn on normally.