Create and use named functions

Named functions let you create custom functions that can use built-in Sheets formulas. We've added the ability to import named functions so that you can use them in more than one sheet.

For a cell with a formula:

When you create a named function, use text as placeholders for inputs.

For example, the IF function takes in a maximum of three arguments:

If you insert the text 'logical_expression', 'value_if_true' or 'value_if_false' as arguments into a cell, you get an error. These arguments are placeholders and descriptions of the type of inputs that the function expects. If you want to take in various inputs to your function, when you write a named function, you must define argument placeholders.

The four primary components in a named function include:

After you have set up the primary components above, you can add more details on the second page. For every argument placeholder that you define, these fields are available:

These extra details, along with the primary components, are used to fill the function help box when adding the named function to a cell: 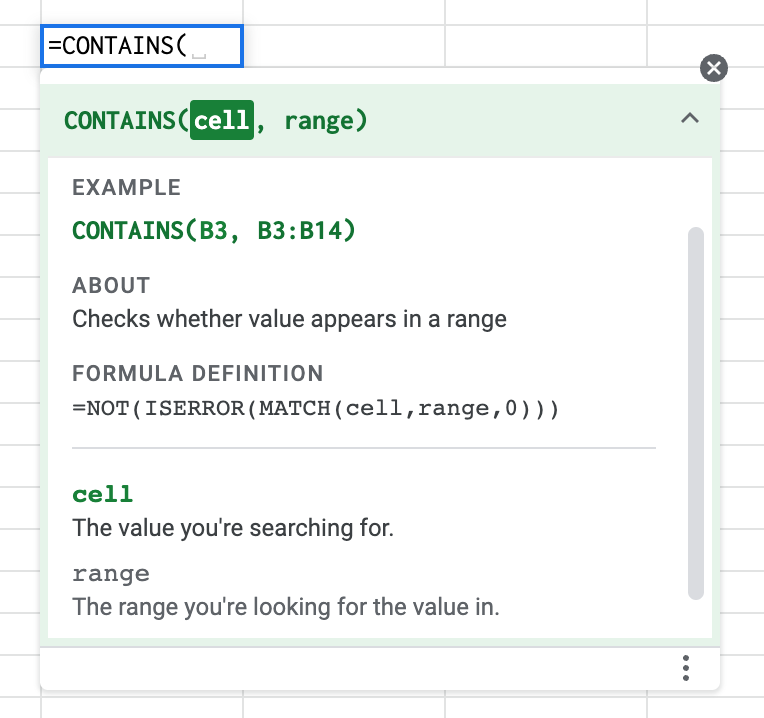 As you create more named functions or start to find useful ones that others have created, you want to be able to use them in different sheets. To reuse created named functions, you can import them from another sheet into your current one:

Named function with no argument placeholders

Can I create a relative range in my named function?

No. All ranges included in formula definitions are absolute. If not included in the definition in that format, it's converted to absolute ranges. For example, 'A1:B3' will be modified when saved to Sheet '1!$A$1:$B$3'. You can pass relative ranges as arguments to the named function.

Can I use built-in function names as argument placeholder names like SUM?

Can I import defined names without parameters into Sheets?

Yes. Defined names without parameters can be imported into Sheets, but should be called without parentheses.

Can I edit an imported defined named function without parameters in Sheets?

Yes. Sheets will update the defined name to follow the Sheets named function syntax. You must add parentheses to all cell references.

Can I create a named function with the same name as a custom apps script function?

I get a 'Calculation limit was reached while trying to compute this formula' error message for my recursive formula. How do I resolve it?

This can happen in two cases:

To resolve it, use a simpler formula to reduce complexity.

If a named function and named range both have the same name, which takes precedence?

The named range takes precedence over the named function.

Ask the Help Community Get answers from community experts
true