Note: The INPUT() function and the ability to bind the inputs to dynamic values is in a beta release mode.

Data change actions are logical operations that modify data values. The desired new values are defined by expressions. In many cases, that value is constant (for example, an action to ApproveOrder sets the status of the Order to "Approved") or it has a well-defined expression (for example, an action to EstimateDeliveryDate sets the estimated delivery date of the Order to the maximum of the delivery dates of each of its sub-orders).

However, there are also situations that need a dynamic input specified either by the user via an app dialog, or specified by another invoking action. This is where the INPUT() function can be used.

Let’s consider an app with Orders and Customers. Let us say there is a ChangeStatus action on an Order that changes a status to "Complete" and also records a comment. This would be implemented in AppSheet as a SetColumnValue action with two columns that are set by expressions (Status: “Complete”, and Notes: “n/a”). For the app user, this action shows up as a “ChangeStatus” button in their app.

Here is an example of an action that sets the value of a column. It uses an INPUT() function. 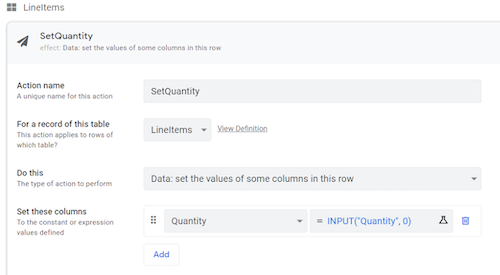 Here is an example of an action that references another action and binds its inputs to dynamic values. 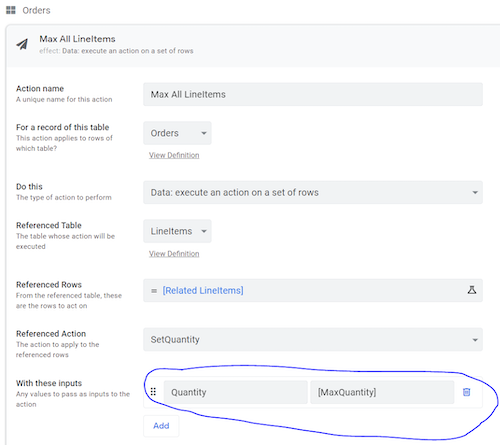 The INPUT() function can be used in any expression but will always evaluate to its default value except for the specific usage scenarios below.

Scenario: In a Data Change Action that sets the value of a column, the INPUT() function must be used as the top-level expression (for example, Notes assigned to INPUT("NotesInput", "n/a"))