When you create an ad unit with smart segmentation enabled, you can choose to test it in experiment mode or use it in full mode.

Experiment mode allows you to test smart segmentation on a random 10% of your app’s users for 90 days.

Note: Users who aren’t in the 10% experiment group will not see this ad unit. 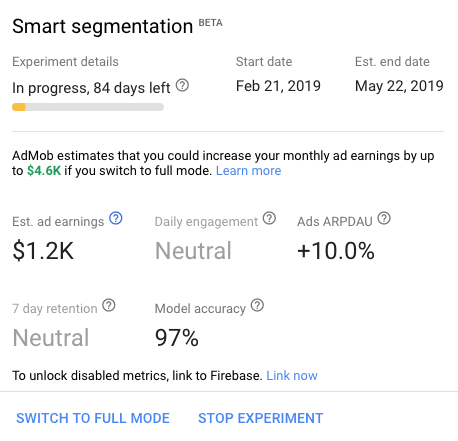 You’ll be able to measure the progress of the experiment group with the following metrics:

Note: Data may be delayed by up to 48 hours.

Data will only display in the metrics when the numbers are statistically significant, which means you might see:

Note: Once you switch to full mode, you can't revert back to experiment mode.

Next: Create an ad unit using smart segmentation
Was this helpful?
How can we improve it?
true